These are my notes from the excellent Digital Clearinghouse webinar this morning on enforcement of the Digital Markets Act (DMA), featuring the European Commission’s executive vice-president Margrethe Vestager, the chair of the Dutch competition and markets authority Martijn Snoep, the European parliamentarian and competition specialist Stephanie Yon-Courtin, and LSE law associate professor Orla Lynskey. The chair was competition economist Prof. Alexandre de Streel.

@vestager summarised: The #DMA will ban “unfair self-preferencing” by #gatekeepers, and their use of their business customers’ data to compete with them; and stop emergent gatekeepers from locking in users. 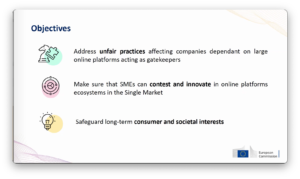 @DeStreel asks: do we need, as #JeanTirole states, more “participatory” (I’d say #coregulatory) platform governance? @vestager: only once democracy has caught up with the private powers and they have a real incentive to take part seriously 👏🏻

@lynskeyo asks: why isn’t cross-border #GDPR enforcement working? 1/ Regulation has ambiguous language (e.g. “inform without undue delay”, “draft decision”), 2/ Different national legal rules, and 3/ Disagreement between national DPAs about when a formal investigation should go ahead… and there are remaining issues with DPA cooperation.

Private enforcement has also seen national divergence, as to when individuals can go to court for compensation — resolved in competition law through the private enforcement directive — and #GDPR Art.80 collective redress.

@beuc has noted rules on admissibility of representative body vary and cause problems cross-border. This is all before considering the interaction between competition, data protection and consumer authorities. << Clearly the @EU_EDPB model needs significant improvement for #DSA.

Based on experience, Martijn Snoep, chair of the Dutch competition & markets authority, is convinced a strong EU-level enforcement authority is required, whether @EU_Competition or other agency; since it will face such powerful opponents, over issues at the heart of their business models. Without EU-level regulation of #DMA, the tech titans will simply pick off smaller countries by threatening to withdraw their services. Also: policymaking and enforcement must go hand-in-hand << UK moved away from this model under Cameron government.

@s_yoncourtin says we need coordination and streamlining of the European Competition Network, the consumer equivalent, the @EU_EDPB, and @BERECeuropaeu to effectively enforce the #DMA 👏🏻

@lynskeyo agrees that what is missing with @EU_EDPB is a central EU-level #GDPR enforcement agency (I agree!) @DClearinghouse doesn’t currently consider concrete cases << I think #DMA should convert it to a Commission enforcement agency 😈

Chair of @AutoriteitCM: it takes years to build an effective new institution, so before creating a new digital authority, look carefully at adding on people and money to an existing structure/institution, which already has core values and ways of working.

Snoep is a fan of #coregulation for the #DMA ex-ante regulations, comparing it to merger control, where there are heated remedy negotiations at the end of the process — to avoid endless litigation. So authority should speak softly and carry a big stick — the power to negotiate, without time-consuming consensus-building.

Bravo chair of @AutoriteitCM for stressing DPAs protect fundamental rights, competition authorities the functioning of markets — which should always come second. His authority has always resolved differences in discussions with the Dutch DPA in the past with a “spirit of cooperation”.

Snoep adds: @BERECeuropaeu works well as a network of national regulators, because telecoms still largely operates nationally. But #DMA gatekeepers work largely at the EU level, and it would be terrible for them to face 27 different regulators, taking into account national interest. A more European #digital market will lead to better solutions, another argument for an EU-level regulator

@lynskeyo makes the important point that DPAs getting involved with data protection by design processes because they will then hesitate to enforce (with example of UK #tracingapp). @DeStreel pushes coregulation AGAIN. No! Orla adds: GDPR doesn’t talk about DPAs giving advice! @ICOnews budget is 75% advice, 25% enforcement, and there are questions about that balance. The advisory role should not in any way supplant the enforcement role that follows. This must be cleared up 👏🏻

@AutoriteitCM chair: we have employed data scientists, behavioural economists and psychologists recently — helps them design much better solutions << like @CMAgovUK.

Except where otherwise noted, the content on this site is licensed under a Creative Commons Attribution-ShareAlike 4.0 International License.